Romana Kryzanowska passed away on August 30, 2013. Though she was ninety years old, and had been retired from the public for some years, those of us who had the good fortune to have trained with her were unprepared to see her go.

Romana was a student at The American School of Ballet in 1940 when an ankle injury brought her to Joseph Pilates’ studio. Joe said she was a “natural,” and she quickly became his star student and an assistant at the studio.

Over the years, Romana became like family to Joseph and Clara. She called him Uncle Joe, and continued to call him that name throughout her life. Even during a period of years when Romana lived in Peru after marrying Pablo Mejia in 1944, and raised her children Paul and Sari, she remained close to Joe, corresponding regularly through letters.

ownership, names, and locations. Eventually, she went on to found Romana’s Pilates, where she taught Pilates and trained instructors well into her eighties.

Romana taught in New York for most of her career and traveled widely to train teachers. But Romana didn’t just teach, Romana was completely immersed in Joe’s work at the studio and she dedicated her life to learning, teaching, and preserving it. Her skill and joy in teaching Pilates is legendary, as was her passion for life. She inspired great devotion in her students, not only because of who she was and what she could do, but because she was 100 percent committed to them – each one was special to her. It was not always easy to be a student of Romana. She was demanding. She had high standards. She could be very tough. But she knew the work intimately, she knew how to really see a body, and she could bring that body into Pilates. She held a vision that was beyond what a student thought they could do — and she got them there, with a wink and a smile. 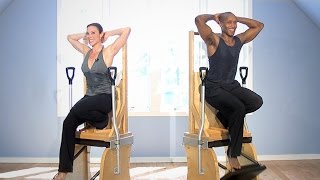 THE SEMI CIRCLE ON THE REFORMER

LEVITATE ON THE CHAIR

PILATES MAGIC FOR YOUR LEGS

PILATES FOOTWORK ON THE REFORMER